"For forty days the flood kept coming on the earth,
and as the waters increased they lifted the ark high above the earth." Genesis 7:17

Did you know multiple ancient societies worldwide in addition to multiple religions believe in Noah's Ark? 1,2

Did you know the Country of Turkey has confirmed the existence of Noah's Ark and established the Noah's Ark National Park that includes a visitor's center with museum?

Question: How does any large ship end up on the side of a large mountain?
Did you know the Turkish military identified an unusual shape at an altitude of 6,300 feet in the mountains of Ararat? In 1960, a Turkish expedition visited the site but found nothing on the soil surface that provided conclusive evidence. Then in 1977, another expedition obtained permission from the Turkish government to visit the site. After 10 years of research, Turkey officially confirmed the unusual shape is Noah's Ark.

Did you know that in 1985, the Noah's Ark site was surveyed with subsurface radar scans that revealed "a boat shaped structure below the surface.?10   "The sub-surface radar is a device built by Geophysical Survey Systems Incorporated (GSSI) that can chart the presence of objects below the surface."10  In August 1986, "Joe Rosetta, vice-president of Geophysical Survey Systems, reviews the sub-surface radar scans. His conclusion: “This is not a natural object. The reflections are occurring too periodic for it to be a natural type interface.” “You’d never see anything like this in natural geology…. Some human made this structure, whatever it is.”"10

"Subsurface radar scans were performed at the site revealing a boat shaped structure below the surface."10

Did you know independent laboratory results have confirm a rivet and a rod to be made from man-made combination of metals? Below are the actual lab results along with information about the tested items. 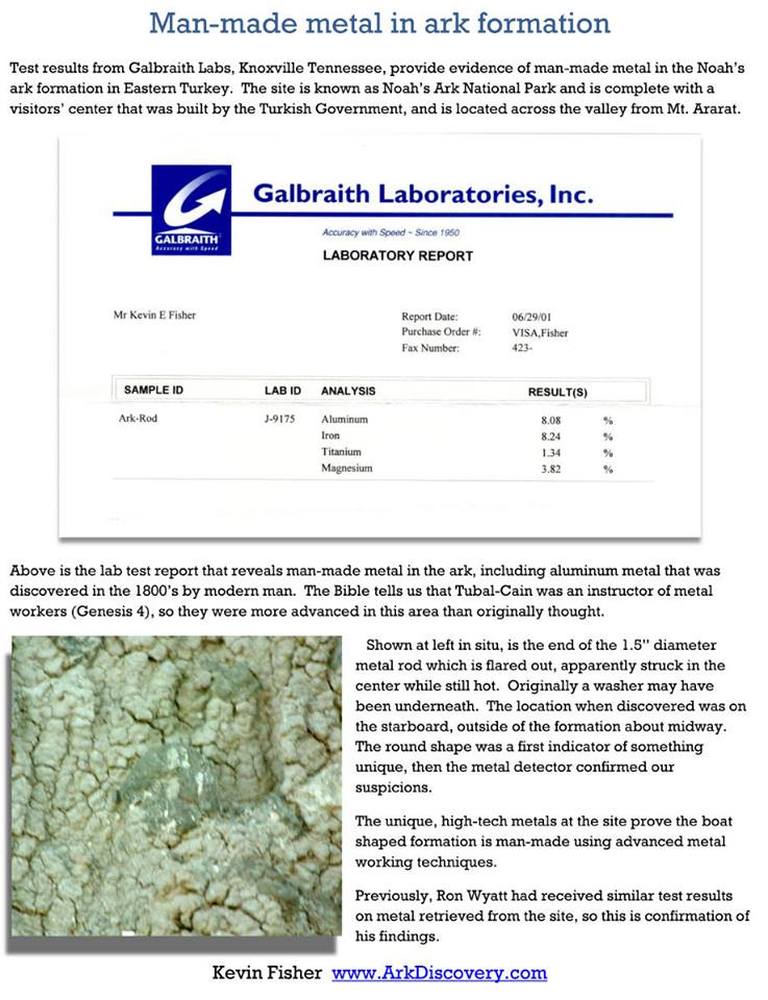 "This deck timber was analyzed at Galbraith Labs in Knoxville, TN". It is an 18-inch deck plank with three layers of wood with "glue protruding from the end."13  The glue is a resin made from tree sap. 14   "Even more surprising were laboratory analyses which not only revealed that the petrified wood contained carbon (proving it was once wood) but there were iron nails embedded in the wood!"9

In 1988, a six inch diameter core drill sample was performed. Analyzed results showed the sample contained petrified animal dung (coprolite), cat hair, the base of an antler, and human hair.15   Four additional 3.5 inch core samples were taken in 1988 by an independent group of researchers which yielded the discovery of "the bright yellow mineral limonite."16  "Limonite is the hydrated oxide of iron, and its occurrence in this environment appears to be anomalous."16 "...these occurrences of limonite are of special interest because they could represent the rusted remains of metallic iron objects."16

Question: What are ancient ship anchor stones doing in a mountain range?
At the town of Arzep (aka: The Place of Eight), which is about 15 miles from the ark location, "Thirteen giant anchor or drogue stones have been located ... Each stone weighs several tons, and they range in height from six to ten feet."18  Anchor or "drogue stones were the equivalent of a storm anchor on ancient ships. They have been found in the Nile and elsewhere in the Mediterranean area ... they are heavy and flat with a hole for tying a line at one end. Their purpose was to create drag in the water or along shallow sandy bottoms: the stone was attached to one end of a boat, and the drag produced would cause the bow or stern to face into the wind and wind-blown waves."17

The animals on the ark were land-dwelling, air-breathing vertebrate animals that correspond to modern birds, mammals, and reptiles. In other words, animals that would drown without the safe haven of land.21  In Genesis 6:19-20 God instructs Noah to preserve "two of every kind".  In Genesis 7:2-3 God provides Noah with "additional information where seven of the clean animals were to be taken and two of every other kind. The reason for this is that the extra animals were for sacrifice. "Then Noah built an altar to the LORD, and took of every clean animal and of every clean bird and offered burnt offerings on the altar." (Gen. 8:20)."19
Sample Deck Plan

How did all the animals fit on the ark?
Millions of animals Vs. 7000-16,000 animals
The Ark had square footage for 125,000 sheep sized animals
"kind" is not the same thing as "species".  The term "species" is part of our modern classification system. The term "kind" most closely correspond to either "family" or "genus" in taxonomy.21 "A good rule of thumb is that if two things can breed together, then they are of the same created kind. It is a bit more complicated, but this is a good quick measure of a “kind.”20

If "kind" corresponds to "family", we are talking about housing approximately 7000 animals on the ark. If "kind" more closely corresponds to "genus", then we are looking at around 16,000 animals. The ark volume is estimated to have been "roughly 1.5 million cubic feet" and "the floor space would be above 100,000 sq. ft. (9,383 square meters)."22 Given that the majority of the animals would be young and not yet full grown in order to provide greatest length of fertility, there is estimated to be more than enough room for all the animals on the ark.
More About "Family" and "Genus"